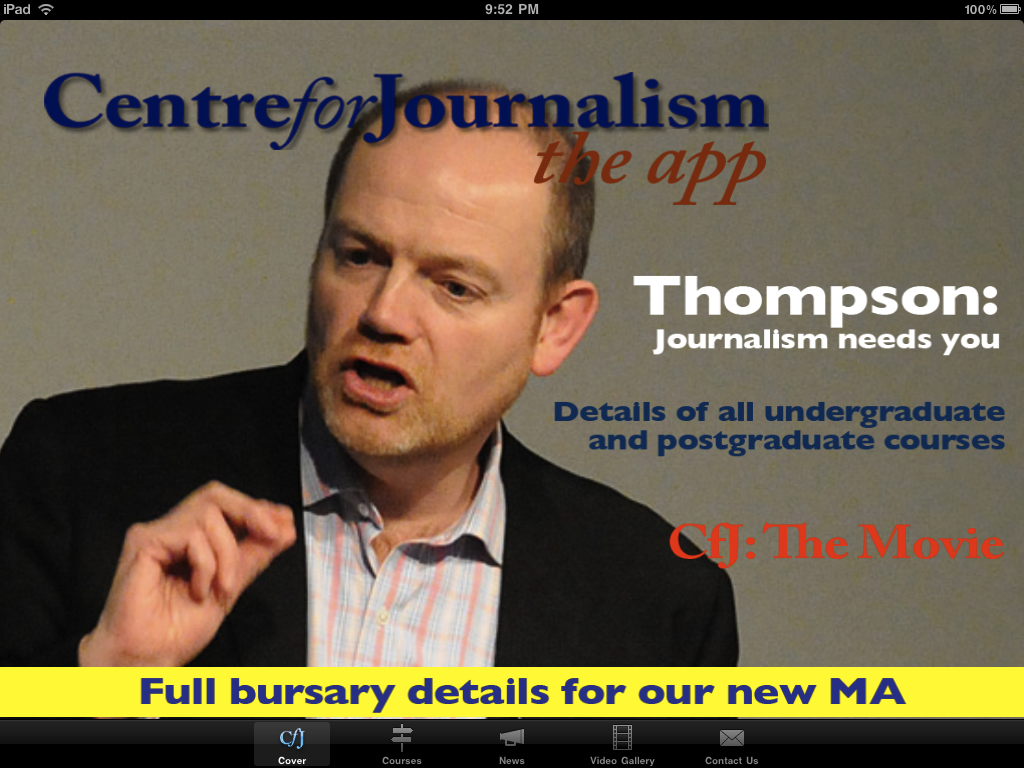 On Friday I had one of those moments of quiet personal satisfaction that are too geeky to convey successfully even to your nearest and dearest: I submitted an iPad app to the the Apple store for approval.

OK, so it's not what you'd call a groundbreaking use of the technology - the app showcases the work of staff and students here at the Centre for Journalism and provides details of courses - but nonetheless it's a step towards answering a question that I'd wondered about ever since Rupert Murdoch told The Kalb Report in April that the iPad "may well be the saving of the newspaper industry". Namely, is this technology going to be accessible to journalism teams directly, particularly those without the resources to throw teams of computer developers at the project? Could a hack with a relatively limited grasp of programming make an app of their own?

The answer for now is only a guarded 'yes'. But the good news is that it probably won't be long before the technical barriers that currently stand in the way start to tumble. 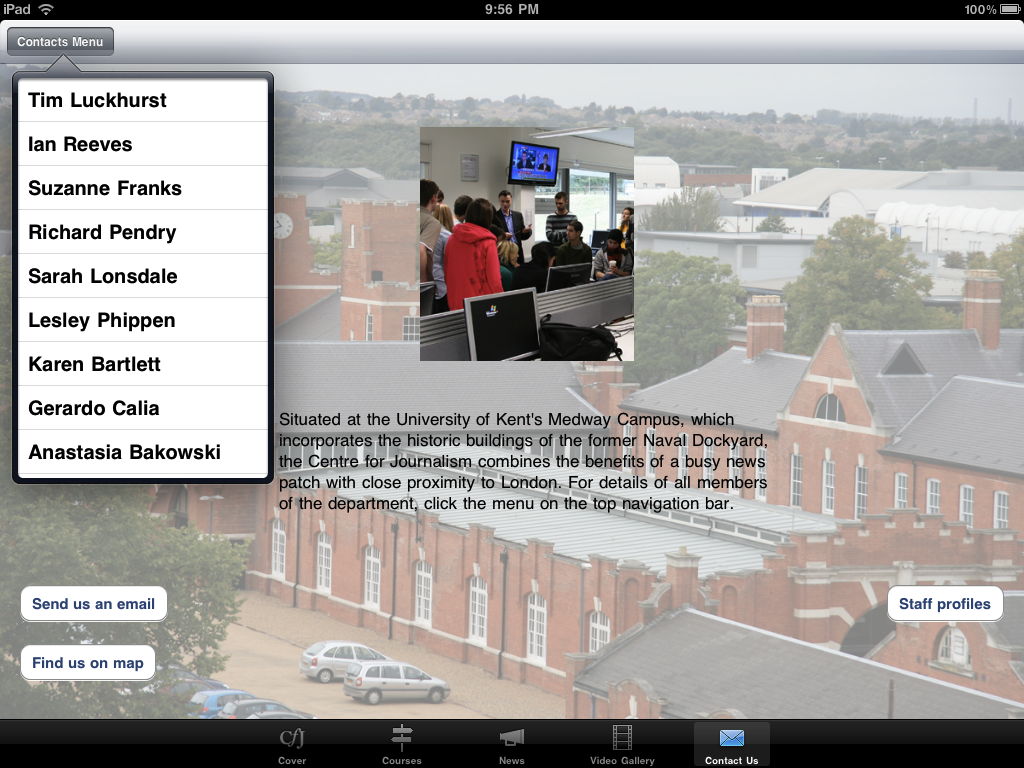 It's clear at the moment that surprisingly few UK publishers have dipped their toe into the iPad waters in any meaningful way. Most of those that have are the companies at the top of media tree with significant development resources available: News International, the BBC, Conde Nast. Others have tended to use services like Zinio and Exact Editions to publish apps that are pdf replicas of their print editions - and so don't utilise the devices to anything like their full potential.

Why aren't others following in the footsteps of the more groundbreaking apps like Sports Illustrated, Wired and NPR? And why aren't we seeing hungry new publishers launching tablet-only titles? After all, the numbers appear to make a compelling case for diving in; six months on from Murdoch's suggestion, the iPad shifted 4.1 million units in the last quarter. Some call it the fastest-growing (non-phone) electronic device ever. And sales of tablet devices in general are on course for 20 million worldwide by year-end. That figure could be 208 million by 2014. Industry guessers reckon sales of apps for the iPad alone could be worth $1billion globally within two years.

Some of the reticence may come from natural convservatism. One publisher told me recently: "We'll wait for Conde Nast to get a bloody nose. Then we'll learn from their mistakes." But my stronger suspicion is that they're more held back by Apple's stringent controls over the technology. That means, for example, that all apps have to be written in a computer language called Objective C, which as I've learned to my cost over the past couple of months, is about as easy to grasp as a greased-up eel in a pond full of jelly.

It reminds me in some ways of one of the first magazines I worked on as a trainee sub in the late 1980s. It used one of the early proprietary computer typesetting systems to create and sub pages, which meant using a complicated series of codes. I remember it took 26 separate key strokes to form the dropped cap at the beginning of a feature story. The system required a huge investment in capital costs, training and constant technical support from its programmers -  yet in a few short years a programme called Quark Xpress swept into publishing offices across the world and brought page creation directly under the editorial team's control.

There's no equivalent of Quark Xpress for the iPad app market. Yet.

But Google is publicly experimenting with App Inventor, which allows non-developers to produce apps for devices running its Android platform. Indeed I've just seen that Jeff Jarvis has described it as the 'Quark of programming'.

A product called Appcelerator Titanium similarly promises to bring app development - including for the iPad -  to the masses without them having to learn Obejctive C (although some other programming basics are needed). It recently seems to have overcome concerns that Apple would block apps that had been developed on Appcelerator platforms.

I suspect that other tools will emerge specifically for iPads too. Already, a series of Objective C iPad tutorial "templates" are appearing online that can be modified to allow publishers to get some of the basic functionality right - displaying pictures and pdfs, playing video, pulling in RSS feeds etc. I've relied heavily on these to muddle my own way through the process. 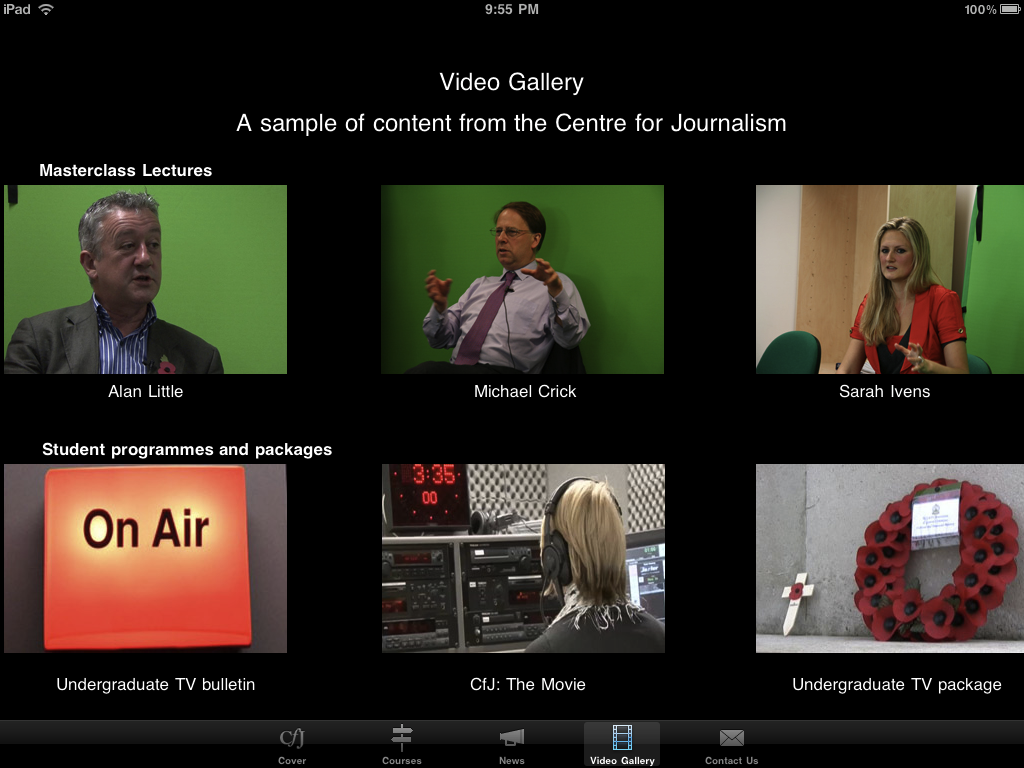 As for the CfJ app, you'll still have to wait awhile before downloading it. It's currently undergoing the technical tests that Apple puts every app through before allowing it into the store, a process that can take several weeks. I'd be surprised if it gets the green light straight away, which will mean more waiting if I have to resubmit. And there's no guarantee my reviewer won't object to some of the app's content - there are plenty of examples of such rejections

That's yet another reason to give publishers pause. And if my app wasn't a free download, I'd also have to have signed away 30 per cent of my app revenues to Apple, who don't even promise to share data with me about people who have paid for my work.

Any chance of a CfJ iPad to go with it?

But seriously, the app looks great - not only one of the first publishing platforms on the iPad, but surely the only one for a training centre for tomorrow's convergent journalists?

The Apple Store is legendary for its varying sense of 'protecting social fibre'. Beside the "plenty of examples" link you provided, one case I remember is in regards to an app similiar to the tilt-a-pen-see-a-woman-in-a-bikini: that was disallowed on the excuse of indecency, while Playboy has a full-fledged app because they are a 'respectable business'.

Start of rant. Ironically, I think that the Apple Store (including the app-checking aspect of it)is one of the biggest upsides of iPhone/iPad (excluding iPod & iTunes). Quality checking, everything works - always, clean, organised, safe and so on. However, at the same time, it's one of its most horrible aspects. The same could be said about the company. It just feels so constricting, dictatorship-like, strangling innovation and basic principles of ownership (hardware is essentially an extension of Apple, by contract not fully in your control) and much more. End of rant.

Technically, I think there probably isn't any excuse to not allow the app (i.e. ridiculing public figures or indecency - no naked Obama bouncing on a trampoline?). Good luck

Indeed. The CfJ is the first

Indeed. The CfJ is the first UK university department to have its own iPad app in the app store. I'll be trumpeting this fact shamelessly very soon.

Ian Reeves is head of the Centre for Journalism

Can a journalist without programming knowledge build an iPad app?